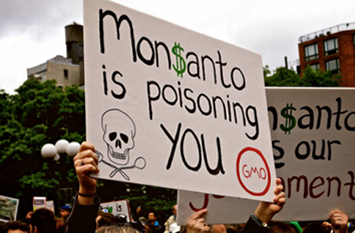 This article was published in The AIM Network 20/4/17 https://theaimn.com/monsanto-tribunal/

Companies must be held accountable for human rights abuses, Monsanto Tribunal judges stated in their legal opinion, released last night. “Radical advancements” in the rights of companies granted by the WTO, trade treaties, investment law and Investor State Dispute Settlements (ISDS) clauses mean people’s fundamental rights to food, health, a safe environment and freedom of expression are effectively being ignored. Companies can sue governments but, as non-state actors, are not directly required to uphold human rights, which are voluntary and unenforceable.

The Monsanto Tribunal judges heard the testimony of twenty eight witnesses from around the world in October 2016. For decades Monsanto has manufactured and promoted the use of dangerous substances including PCBs, Agent Orange, GM crops and glyphosate-based-herbicides like Roundup. Monsanto’s chemicals have resulted in the mass poisoning of people and communities. Its aggressive promotion of GM seeds and the use of patents has denied farmers access to seed, interfered with the ability of people to feed themselves, threatened biodiversity and undermined food sovereignty.

GM crops have vastly increased the use of Roundup, which the WHO’s International Agency for Research on Cancer found to be a probable carcinogen in March 2015. The Tribunal was extremely concerned about the corporate capture of science and the intimidation of scientists. They noted a current court case in the US last month revealed allegations that Monsanto manipulated science and regulators to retain approval for Roundup. Freedom of information and science are basic to the ability of people and communities to know what they are exposed to and how to protect themselves. Monsanto’s bullying tactics, as exposed by scientist witnesses, put this at risk. Roundup has been found in food, water, air and the bodily fluids of most people tested. Its use has rapidly increased and it is likely that a huge proportion of the world’s population is exposed to this chemical making this a global human health and rights concern.

The Tribunal’s judges strongly encouraged legal and civil society to use the Advisory Opinion to advance international law to put human rights above corporate rights. Just as the Nuremberg Trials were created to bring war criminals to justice, International law needs to be expanded to make corporations like Monsanto accountable for their actions. The Tribunal recommended that the crime of Ecocide be added as the fifth Crime Against Peace in the Rome Statute of the International Criminal Court.