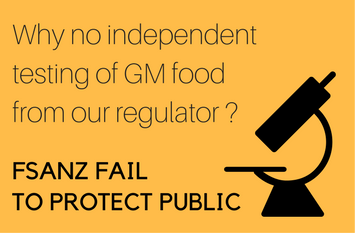 We have been eating Genetically Modified (GM) crops for nearly twenty years. Ninety-nine per cent of GM crops are either sprayed with weedkiller, mainly Roundup, or kill insects who eat them by destroying the insects gut, or do both.

The companies say these GM foods are the most tested in history -  but the tests have not been done.

Regulators do not ask for long-term, reproductive, developmental or multi-generational animal feeding studies on GM crops.

However, the companies can submit animal feeding trials. Most of the studies last for 90 days or less. This is much shorter than the two-year life span of a rat or a mouse. Sometimes only five to seven animals per group are tested but it can be as few as two animals. These tiny groups will only show harm if it is extreme.

The whole GM plant may not be tested. Instead animals are force-fed one dose of the substance the GM developer thinks they have engineered into the plant. The animals are then observed for only one or two weeks. These tests cannot show GM food is safe for us to eat over the long term.

The companies who want their GM crop approved pay for the tests and provide them to Food Standards Australia New Zealand (FSANZ).

FSANZ do no independent testing or ongoing surveillance and expect the GM companies to “monitor for existing and emerging risks of their products.” FSANZ have never rejected a GM crop application.

Animal feeding studies, examining the weight of chicken breasts and the tenderness of lamb chops, have been used in applications for the GM food we eat. These are animal production studies, done to reassure farmers that animals fed GM feed will produce sufficient meat. These studies do not show that GM foods are safe for us to eat.

When studies do show harm

“Lists of studies” claiming to show safety are nonsense

Two popularly touted ‘lists of studies’ are the Nicolia review (1700+ studies) and the GENERA list (400+). These lists are a random mix of studies mostly irrelevant to human safety. Some are done on animals like trout, quail, chickens, cows and sheep that have different guts to humans and/or lay eggs. Studies showing harm, or the potential for harm, are listed and yet their significance is downplayed or ignored.

We wouldn’t believe a couple of ‘lists of studies’ could show ‘all pharmaceutical drugs are safe’. We expect each individual drug to undergo rigorous testing. We should expect the same for our food. These tests must be independent, detailed and look at human health, not chicken breast weight, and be long-term studies for the life time of the animal.

Currently our labelling laws are full of loopholes so almost all GM food escapes labelling. We mut insist companies selling us food tell us what is in it.

Want more information? Read a version of this article with added references.