Almost all processed foods contain GM ingredients but shoppers are in the dark as most GM-derived ingredients escape labelling,[i]  a report by Mothers Are Demystifying Genetic Engineering (MADGE) being launched today highlights.

The report, which details numerous tests raising health concerns while our food regulator FSANZ continues to let GM foods into Australia and New Zealand, will be launched to mark World Food Day today in Melbourne, Perth and Wellington.

“In Europe you know if your chocolate bar contains lecithin from GM soy or if your takeaway hot chips are being cooked in GM cottonseed oil.[ii]  Australians have a right to the same information,” says MADGE co-founder Fran Murrell.

Food Standards Australia New Zealand recommends GM crops for approval based on studies done by GM companies like Dow and Monsanto. FSANZ recently approved a GM corn that is designed to be sprayed with the weedkiller 2,4-D. Toxicity was measured by giving 10 mice a GM protein and when they hadn’t died 14 days later it was considered successful ”[iii]  - you don’t need a science degree to see this test is totally inadequate.

“The only two-year toxicity study on GM food was released last month (Seralini et al 2012). It showed increased illness and death in rats fed a GM corn (NK603) and/or Roundup.[iv]  Ill-effects began to emerge 120 days into the trial.

“Conversely, FSANZ only required a 9-day trial on this GM corn. They assumed that it would not be allergenic and that, although there were differences in the fatty acids and amino acids, it was the same as non-GM corn.[v]

“We are fed up with FSANZ assuming GM is safe on the basis of patchy data provided by the GM companies.[vi] Regulators appear to have a double standard of passing GM company science without comment but fiercely attacking independent science that is published in peer-reviewed journals,”[vii]  Ms Murrell concludes.

The MADGE Report: “Fed Up with FSANZ” is being launched in Australia in Melbourne, Perth and in Wellington, New Zealand.

Details of events:
Wellington, NZ:
Place: the FSANZ office on The Terrace
Time: 12.15pm start of a march to Parliament where a dossier will be presented to the Minister of Health
Contact GE-Free New Zealand (04) 477 4744 info@gefree.org.nz

Fed Up With FSANZ report 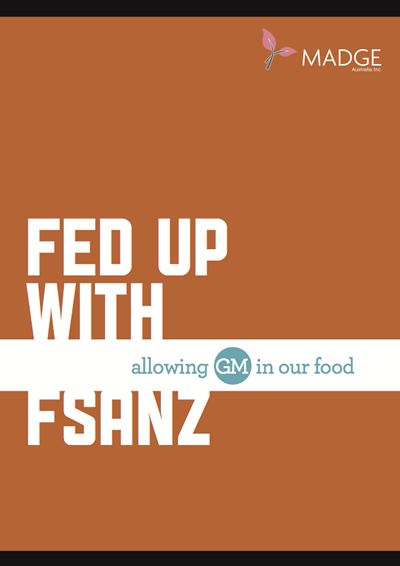